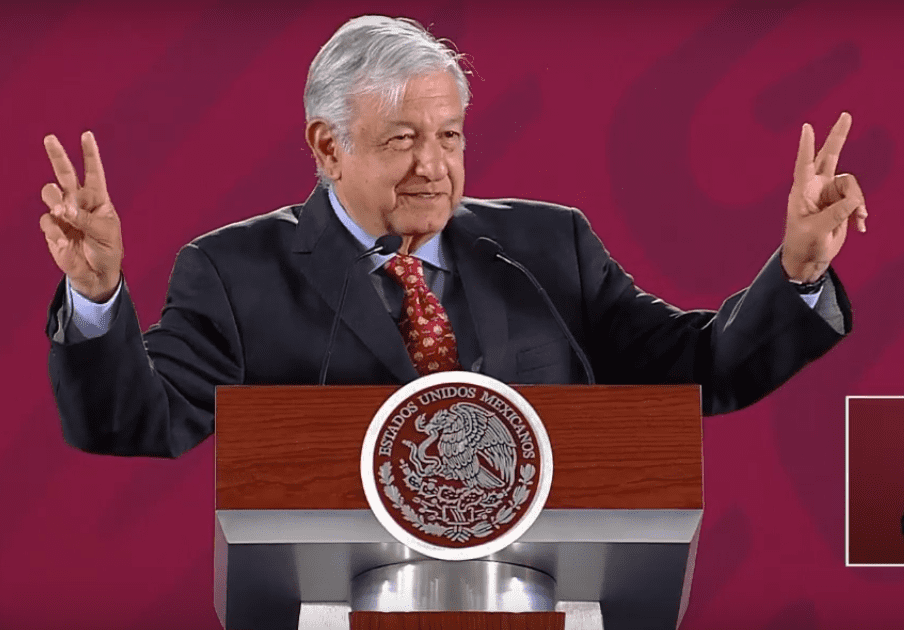 Despite the threat of Trump, mexican president López Obrador will not take extraordinary actions to stop the migrants, he is confident that the current plan works, and that the regional development will definitively stop the migration

Mexico .- In a morning press conference on May 31 , the president of Mexico, Andrés Manuel López Obrador (AMLO), reaffirmed the previous letter published in response to the new threats of Donald Trump to impose a 5% tariff on all products, also called on all Mexicans to join and not to provoke.

López Obrador said that at the moment he will not take any extraordinary action and that he will continue with the current plan in which he trusts. He also reiterated the development of the region as the definitive plan to stop migration . The foreign affairs minister, Marcelo Ebrard, will be sent to Washington to seek the US government to retract his decision.

The Mexican president trusts that the information on the actions taken in Mexico to prevent migration will account for the work that this country is doing.

We think that all conflicts in bilateral relations, must be faced and resolved through dialogue with communication, does not lead to any good use of coercive measures.

How will López Obrador resolve the new taxation of 5% on Mexican products?

Andrés Manuel López Obrador, insisted on handling the issue with prudence to avoid breaking the narrow economic, commercial and cultural ties, as well as friendly relations between the people of the United States and Mexico. 24 million Mexicans are in the US, the president said.

We are obliged to act with great prudence, and we are going to insist a lot on the dialogue for that, I have instructed the secretary of SRE, Marcelo Ebrard, to move to Washington.

Marcelo Ebrard, Chancellor of the Ministry of Foreign Affairs, will remain at the Mexican embassy in the United States to seek government and communication officials, in the search for an exchange of views to reach an agreement «on this measure to increase taxes on Mexican products, which are exported to the United States, «concluded AMLO.

The president of Mexico will wait for the situation to evolve after the diplomatic efforts of Marcelo Ebrard in the United States. He was asked if he had ruled to appear personally before Trump, however he reiterated that he will wait for the results of Ebrard.

As I say in the letter, we do not consider that the law of the canon should be applied, it is not tooth for tooth, we would stay chimuelos, we have to look for the dialogue. Dialogue and politics were invented to avoid confrontation to avoid war

The president of Mexico asked all Mexicans «to have confidence that we are going to overcome this attitude of the United States government they are going to rectify».

The people of Mexico do not deserve a deal like the one they want to apply: AMLO

President Andrés Manuel López Obrador, said that the people of Mexico do not deserve the treatment, because Mexico has always attended and heard «the approaches of the United States, is doing a job to help increase the flow of migration.»

In addition, he noted that the problem of migration does not fall entirely in Mexico because it originates from other countries, «we do not want to blame them are situations that arise.»

In countries where people do not have options, have no alternatives and are human beings, I want to say that we have accompanied them to return to their countries, to many

López Obrador affirmed that the responsibility in migratory politics is being fulfilled, according to human rights they have protected and helped to return migrants to their lands of origin.

All this will be reported in Washington, we also want to understand that it is a social economic issue. There are many who desperately are abandoned their villages, for lack of work and violence

The Mexican president reiterated that Mexico will help migrants do not enter the United States illegally, but «we also have to do it respecting human rights, not authoritarianism.» He reiterated that the situation of many migrants is worrisome due to the poverty and violence caused by migration. «Thousands come, thousands of children and children alone.»

Said the president referring to the 5% tariffs he plans to impose on Mexican products. I think there will be a reification , because these measures do not suit Mexicans, but neither do Americans. «

«And the leaders have to pay attention to the citizens,» concluded López Obrador, who said that this situation does not stop the process to ratify the T-MEC treaty.

Given the threat of Trump, will Mexico reinforce measures?

When asked if they would reinforce the measures after the announcement of Trump, he said that they will continue with the current work that has been done, in which he trusts that he is doing well and in accordance with human rights, he mentioned that it is a situation of poverty where even children alone migrate and never before so many boys and girls alone had migrated alone.

We are going to show you data so that you can see that the migratory flow has grown due to the crisis in Central America, half of them are from Honduras. With this growth we have acted; has been accompanied back to their villages to migrants as had not been done in other times, respecting human rights

Will not any extraordinary action be taken? A journalist asked. «It’s already a plan,» said AMLO, and said he could not anticipate much of what Ebrard will present in Washington.

Once the evidence is handed out, let us know our actions and what has been done to accompany the migrants back, give them work options and protect them; everything we have done

«What I can say is that we have not stayed with our arms crossed, we have not neglected this painful issue,» he said, and it was here that the Mexican president reiterated that the true way to stop migration would be thanks to development.

This should not happen; if there were not so much poverty, so much inequality. And we keep insisting on addressing the underlying problem

He reported that recently the Economic Commission for Latin America and the Caribbean (ECLAC) has already presented the proposal for the development of jobs in Central America, «and it is a complete plan, and we have been working with the United States government that this is the guide of attention «

President Lopez Obrador said he will have the support of all Mexicans, both those who live in the nation and in the United States.

I felt it since last night, many people supporting the position of Mexico, there will be national unity, all the people of Mexico will show solidarity

When asked what Mexicans or institutions supported him, he said that he began to receive support samples through the networks and that even the government secretary showed him a message of support from Carlos Slim and his family. In addition to people who protest every day in front of the palace, including electrical workers.

It is illegal to impose the tariff

One of the journalists said that they have said that it is illegal to impose the tariff. Given this, AMLO replied, that it is not only a legal matter, we want to have a good relationship, «and we do not want that as a first decision to proceed legally, we want dialogue» he clarified that it is not his intention to avoid legal actions, respect among nations.

We want there to be dialogue, that there is understanding and that an agreement be reached, without the need to proceed legally

He hopes that Marcelo Ebrard arrives in the United States with much support from all Mexicans. Andrés Manuel López Obrador, said that the people are backing their government like never before:

people are supporting as never before, since the letter was made known, there is a sense of unity, of support, of going together, of not confronting each other for now, of making a truce in the differences we have

Said the president, who also reiterated that he will not modify the migration policy, because the current one has a ‘very good policy’, so he will try to convince on the basis of the data that Marcelo Ebrard will present.

I have no doubt that you have been acting and done well, there is no reason: but you have to listen to the American points of view.